The Protestant garrison church at th Kaiser-Friedrich-Platz filled a large mourners. It was to prove the Officers and the Crew, killed in the Zeppelin Airship “L2“, their last respect. Yesterday the coffins were transferred in solemn procession from the military hospital to the church and have been laid out in two long rows in the sanctuary. In the middle the coffins of the officers, right and left these of the NCOs and other ranks.

War flags of the navy are stretched beneath the colorful glazed window choir, sailors and Marines are keeping the guard of honor. Among the hundreds of wreaths the coffins are completely covered. Dedication belts in all colors adorn them. 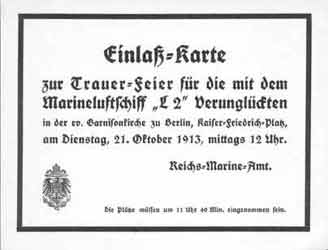 Dull roll the timpani of the Kürassier band. Silently coffin onto coffin will be lifted on the cars by the marines. The impressive cortege leaves in the gold of the October sun, under falling red leaves, to the Garrison Cemetery in Hafenheide.

Would the closures of the photographers not rattle, no sound would disturb the peace. Only here and there a whimper from a woman´s mouth in front of one of the seven coffins, which are embedded here in a common grave. 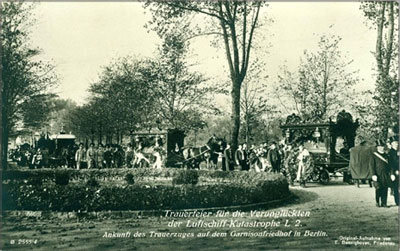 The flags are cut, the heads expose themselves to prayer for the brave, who are now given back to the “earth of their country for which they died”. So the priest says in heart-reaching speech.

Then the three infantry volleys, short as three whips; muffled thunder of twelve gunshots; and now the emperors sons, all six, approach the grave and show their last respect to the dead, while the sobs die away.

In the church the imperial were left with the Crown Princess. Empress and Crown Princess step into the circle of relatives of the deceased, ach adjudging a friendly word of comfort and oppressing the hand to condolence.

Then farewell to the imperial family. Indefinite crowds do them again in silence reverent greeting.

It was a deeply moving fatherland ceremony. Involuntarily the gazes address spying the height, wether there would not appear an air cruiser at the top as honorary escort. We are connected precisely with the Zeppelin works already in the closest.

The heroes who have sacrified their lives for the great German cause, no rest in the earth´s lap.

On the way back one encounters a single hearse that takes a dead body to the railway station. How abruptly side by side are proud victory in the air and the shattering death plunge.

“One dreams of victory wreaths,
one also thinks of death.”

Already this morning, before the church was opened to the admission tickets bearing mourners, had Prince Adalbert in order of the imperial couple laid a wreath on each coffin. Of all german princes, the units, associations, clubs of the naval personnel etc. were sent wreaths and palm branches.

On a black velvet cussions are resting the decorations and medals, which the dead had borne. The galleries of the church were filled with marines, delegations of the naval stations that participated on the orders of the Emperor at the funeral. In the front rows of the nave, the relatives were seated, for the mourners some of the benches on the right side of the nave were kept clear.

Soon the sunlit chamber is filled. The entire Admiralty and the in Berlin present Generals were represented at the funeral convention. All officers of the Greater-Berlin garrison had sent delegations. Representatives of the magistracy and the Reichstag President Kaempf were present. Among representatives of foreign states resigns at first the French naval attache a huge wreath with a long ribbon in colors of the tricolor.

Meanwhile the on the funeral parade commanded troops are taking establishment in front of the church. A sqadron of Guard cuirassiers with the regimental band ride on and the Life guards of the 1st Battery Guards Field Artillery Regiment goes on. The bells are committed with swinging bells. Through the masses, who surround in a wide arc  the cordoned-off sqare in front of the church, goes a movement. The yellow and brown imperial cars drive in. With dignified gravity the imperial couple is greeted silently. Emperor and Empress are expected in front of the church from the Crown Prince and Prince Eitel Friedrich, Adalbert, August William, Oscar and Joachim.

The emperor in admiral´s uniformat first welcomed Grand Admiral von Tirpitz and then the old Count Zeppelin, who had appeared in Uhlan uniform. Longer time he spoke with the two gentlemen. Thereafter the Emperor greeted the Crown Princess, the Crown Prince and his other sons. Their Majesties then took place on the right loge of the church.