L2 Press report: The cause

L2 Press report: The cause

Press report about the cause of the crash of Naval Airship L2 (Zeppelin LZ 18) on Johannistal.

In the downfall of the “L 2” it is the effect of the vacuum, of the rarefied space, and its powerful suction. When the flash twitches, it rips a hole in the air, but then the displaced air mass immediately crash again with thunder in the hole. When zeroed on new warships, it occured already, that the through the protection resulting vacuum in the air in front of the turnet has torn the deck. In a speeding car, we can observe something similar:

We do not feel, as one should believe, the air draft forward in the face, but on the back. The car when driving, creates a diluted space, and from all sides of the ingested air rushes on. On the road, we see behind a driving car the turbulence of

twisted skein-shaped raised clouds of dust that make us this process very clearly. On the “L 2” is now a mixture of hydrogen with oxygen in the air, the explosive “explosive gas” that already in contact with a small spark or even a red-hot platinumblows up, and therefor a fire does not require, has been sucked into the front engine gondola. The airship is supported by a number of gas-filled ballonets which are arranged within the frame. Like a in a fist compressed sponge, when if I redeem the pressure gradually, swells up again, does the gas expand when the air pressure is lowered in the area, thus with the rise of the airship. The air burdens with a weight from 1293 grams per cubic meter on the globe and is getting lighter with increasing altitude. To select an image: a dozen quilts presses heavily upon the sleeper, but if he puts on one, so that only the top eleven are, it is even easier, and the more he brings in, the less pressure is felt . In closed 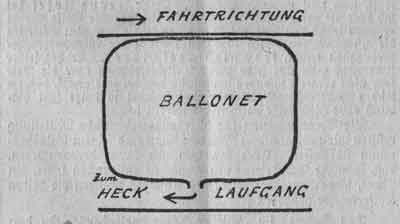 Ballonets the expanding gas would now blow up the shell, so because of this they all have – even like the balloon – down a hole as a safety valve through the escape of excess. For each 80 meters rising 1 per cent of the content area. At the height at which the disaster occurred, the “L 2” must had blown off thus already more than 800 cubic feet of gas. It enters the walkway, and is mixed with air, flushed out the rear, where it finds an opening and evaporates into the free atmosphere. A part of the now explosion gas, however, as indicated in the last of my schematic drawings, has been sucked into the engine gondola.

The bow of the gondola is still increased by a windbreak – panes of isinglass – and pulls air with it. Behind it, a vacuum is created, and at the “L 2” it is the airship body itself so close that the powerful suction draws gas from the passageway. There is no need of carburetor fire, but only of a tiny spark of electricity, and the mixed gas flares. As the airship with the tip upward flies up, the flame runs forward, the front ballonets explod, the now gasless, so heavy fore –

swoops forward, and the stern of the “L 2” rises steeply. In the next second, the flame is running up here and let all the other ballonets explode: Now collapses a blood and meatless giant skeleton on the ground. After the disaster has happened, of course sounds incredibly easy, to say: The gondolas have to hang low and may have no windprotection, so that between them and the airship can pass a free wide air flow and keep the suction away from the shell. Such risk limits merely determin the practice, previously the best professionals have not presumed an explosion. Each construction is a compromise.

‘Impact will override backing!” says our rule for all weapons, and the approach of the gondolas to the airship is done to reduce the cross section and thus the aerodynamic drag, thus increasing the speed of the ship. Of course, only up to the permitted limit, ie within the necessary security – but about this limit they were just mistaken.