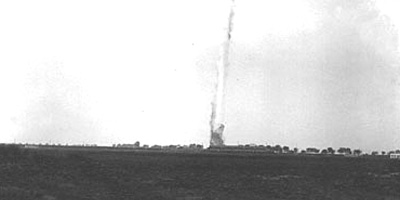 How the accident occured:

Probably due to carburetor fire in the front engine gondola, the fuel tanks exploded, a huge flame set fire to the gas cells, and the next moment the air cruiser crashed to the ground.

About the terrible incident that is impossibly be described in all its details, we learn the following:

Today morning at 10 o’clock captain Freyer, the guide of the airship, wanted to make a test drive with the ship. The balloon that was filled only weakly because they wanted to keep a small altitude was brought out to the field. Duly rose “L 2” up to about 150 meters high, made a loop over the field and then turned westward to Britz to fly from there on over Berlin to Doeberitz.

The pilots who were standing outside the shed, watched the maneuvers of the “L 2” and noticed almost all that the rear engine developed a lot of smoke. Since in this circumstance there is certainly no danger, they did not pay further attention to the smoke of the machines. The airship flew over the Albatross sheds and the behind located houses of Johannisthal. Then it came into the open field, which lies between Johannisthal and Britz. The citizens of Johannisthal stared, as usual, interested after the airship. At a rapid pace, it roared at 150 feet above their heads away. One could hear the humming of the propeller and the noise of the 700-horsepower evolving machinery. Nobody could have guessed that the next moment a horrible, everything ever before seen exceeding catastrophe would occur:

At the moment, as “L 2” crossed the to Rudow’s leading country road, a bright flame suddenly struck up in the front engine gondola. Like a rocket a fine strip of flame shot to the middle of the ship. Then followed a terrible explosion. A crash, which cannot be compared to anything, and which was so strong that in every street of Johannisthal and even in the neighboring towns, as in Rudow and Treptow, all to the field located windows at distances of up to two kilometers were destroyed, then the airship burst.

A huge flame shot 20 to 30 mtr high to the sky. The next moment they saw shapeless lump of iron pieces, canvas and rubber gear, and human bodies flying through the air. The bare aluminum skeleton continue flying some 30-40 Mtr through the air, because the motors were still working and the propeller were spinning. Then the wreck shot perpendicular to the floor, devastating what was still breathing.

The citizens of Johannistal stood stunned at first. Then the cry of alarm flew through the village, “Help, the zeppelin has crashed!” Faster than it can be described, rushed hundreds of people in cars and bicycles with hatchets, axes and spades, armed to the field to help in order to to save what could still be saved. From the airport here, the cars were shooting up at full speed, each carrying 10, 12 men of the Marinedetachements that were already fitted with all life-saving equipment.

The ruins gave a terrible, anyone who has seen it, indelible impression. At first glance, one saw nothing but a tangled towering to the sky mountain of aluminum tubes and frames, between which are inextricably thousands and thousands of wires dragged. The whole place was surrounded by thousands of onlookers, who densely packed, driven in breathless silence surrounded the picture of horror and desolation. All available policemen were only used to shut off in common with the sailors, the debris field by thick ropes. The audience followed the instructions without a murmur. Scheu wichen die Menschen zurück, die in den formlosen Leichnamen, die man an ihnen vorübertrug, Freunde und Bekannte, ja sogar Verwandte vermuteten und vielfach zu erkennen glaubten. Shyly the people receded, who in the shapeless corpses, which were carried past, friends and acquaintances, even relatives presumed and even in many cases believed to recognize.