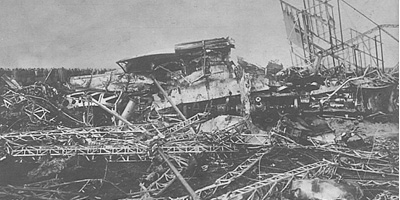 The remains of the airship let clearly see that the balloon rushed vertically into the deep after the fire. The gondolas along with the heavy, weighing several hundredweight engines have deeply imbedded in the earth, and the short grass, that covers the field, is burned in a radius of about 10 to 15 meters.

A sharp, all-pervading smell of burnt linen, rubber and of corpses pervades the air, so that in the immediate vicinity of the pile of rubble it is hardly to endure. 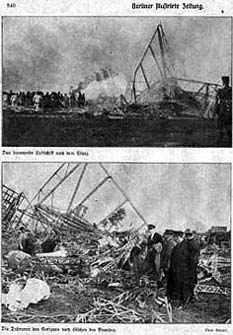 The propeller of the front engine gondola are still almost intact. Similarly the drive shafts, which have linked the bolts to the engine. The two powerful engines have deeply imbedded in the ground. They were still hot after an hour. Anything special, however, could not be determined. although they have just been the cause of the terrible disaster.

The guide gondola, which was placed in the forefront of the “Zeppelin“, right before the first engine gondola, is completely folded and collapsed into itself. The strong aluminum walls are crushed like thin sheet of metal. The central corridor, that linked all three gondolas, can at least still be seen in its outer contours. The thin ribs, that at some spots are barely an inch thick, are lying around completely deformed and bent.

How big the explosion was can already be seen from that such ribs as well as parts of the gondolas, pieces of wood and so on were thrown around 600 meters up to the airport. Here the remains have been piled up to a height of 4 to 5 meter. They buried the gondola in which in the opinion of the experts have yet to find corpses.

The rear has suffered the least. The control cells still show some of their covering and charred linen rag hang around everywhere. The huge fuel tanks are lying around completely empty. Their content has been emptied on the gondolas and inot the interior at the time of the explosion. The massive aluminum barrels but still clearly show their form.

Here and there lie the clothes of the men who lost their lives. Waistcoats, leather pants and jackets, often completly charred, are offered to the eyes of the terrified observer. The most terrible sight but offered the corpses. Almost all of them burned beyond recognition and difficult to be reconnoitre. Ambulance automobiles and -cars drove constantly over the place and took away the human remains.

In the pocket of the guide, captain lieutenant Freiyer, they found a list of those persons who have participated in the accident driving.