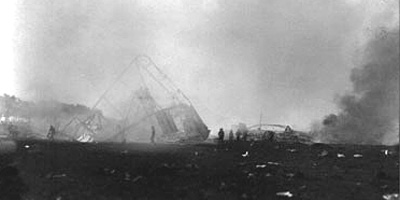 Close to the Rudower Chaussee, which runs across open ground, that is just opened up to building, a small piece of the last apartment buildings of Johannisthal away, one can see now the vomited into a thousand pieces of bones skeleton of the former airship “L 2” are in a meadow. High on rise the aluminium ribs of the tail piece, then follows in the long axis of the crashed ship a maze of twisted aluminum parts, some deep, deep drilled into the earth.

The aluminum shines still white in its large mass and only at a few points one notice from the fury of the flames blackened parts. On this sad mess hanging here and there, the meager scraps of yellow balloon material, here and there, half buried, behold, a small utensil that is escaped by a miracle of destruction. Damaged fuel tanks are scattered all round, large boilers, which the ruinous explosive material has already poured. Three in the movement frozen wings of a propeller protrude into the air, another one has only kept one of his wings and stretches it ahead obliquely. Tiny things that are talking a terrible language, are still lying around on the thick grass ground: shiny buttons, cloth scraps, small gears, once the useful part of a large, now ruined work.

In the afternoon there was the quiet road, which opens up the crash site, in a perpetual motion. Cars pulled out into long lines, at the sides families by foot with bag and baggage, with strollers and big baskets of bread. The crash site by police and military cordoned off a large square, surrounded by a wall of people. One lies on the grass, eating ones sandwiches and throws away the paper. Toils midst of the square is a small detachment of sailors, sorting the debris as possible. From the tangle of aluminum sheet is torn and cut out, which can be removed and taken away in baskets. From time to time  one of the men roses from his arduous work and turns a little bit between the fingers, some tiny insignificant, perhaps a luxury item.

But all this work is carried almost silent. Hardly a word is heard. The many hundreds who beset this place, speak very, very softly. Then occasionally drives a car through the locked room to the heap of rubble. Men who are members of the Commission of Inquiry and are welcomed by the naval officers who are to exercise supervision. The Secretary of War drives up and paces with his company slowly the debris field. At the point where she is laid low, is also the head of the airship, a conically curved, dented dome, a huge thimble, a metal dome not dissimilar. The weather keeps clear only in the evening autumn mists rise and the sun disappears in the orangered of the horizon, as a flying machine, the only today passes over the course in his tracks.

Then the sailors are replaced and the crowd warps. the skeleton remains still. A few hundred yards away is the hangar. The Navy lag on its roof is at half-drawn. In the lobby lie the bodies of 27 victims.

The guard of honor, men of the marine corps, are standing stiffly with bayonets beside it, with their helmets and chin strap. Outside the hall, everything is closed off to the most rigourous, no one will be let in, only see through the fence is permitted. Who wants to reconnoitre a dead, is shown a list. A very old woman stops over trembling in front of the sentinel. She speaks humbly a few words. She is shown the sheet of paper that contains the name of the dead. Suddenly she screams, reaching into the air and then collapses. Unconscious she is being taken away. A woman with a little girl held in hand is weeping conducted into the hall.

As the moon red blurry, as shrouded in a veil, rises hazily, a large hearse comes driving through the gate of the fence and stops at the small door of the hall. It is to carry the body of one of the officers, which brought the training cruise of the “L2” to death. This morning, the corpses of the other victims are brought to the garnison hospital. Until late into the evening life here is not coming to rest. On the airfield signaling flares rise and illuminate the sad scene for a moment.  (F.K.)